How to Identify Asbestos

Home > Asbestos  > How to Identify Asbestos 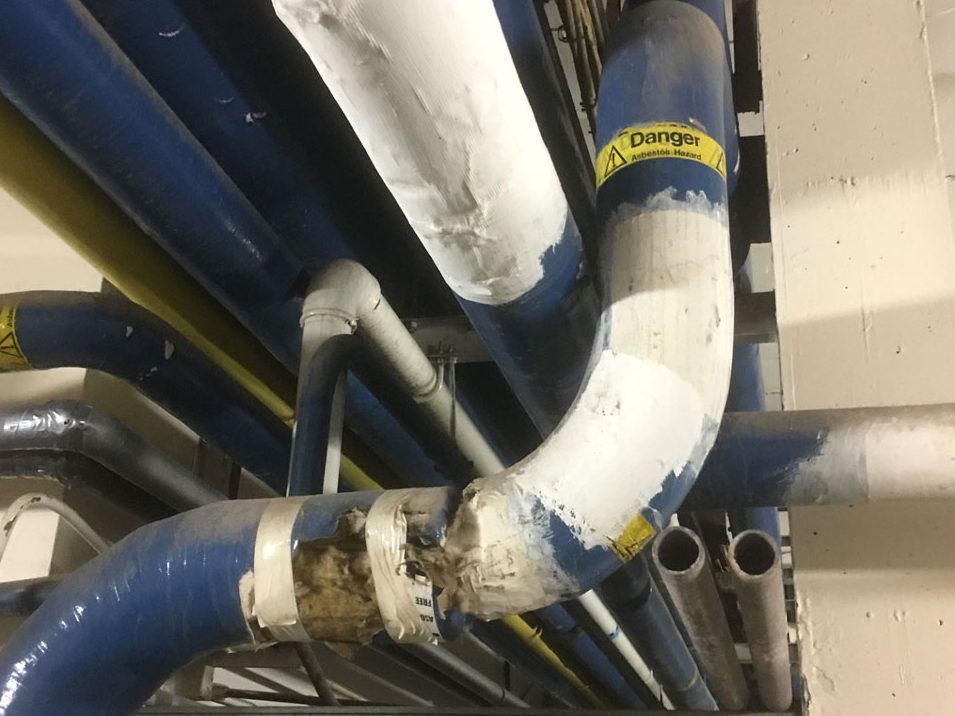 25 Aug How to Identify Asbestos

Posted at 12:02h in Asbestos, Uncategorised by Jo Wood 0 Comments

Asbestos used to have many purposes. Its fire retardant properties made it very popular within the construction industry, and its affordability, chemical resistance and versatility meant it was used in over 3000 different products and materials.

Since it was labelled as a carcinogen, the damaging effects of asbestos have only become more apparent. It is estimated that 20 tradesman deaths are associated with asbestos every week, most commonly from lung cancers such as mesothelioma.

Anybody who may come across asbestos in their line of work should be aware of its warning signs, as learning how to identify asbestos is essential for your health and safety.

What are the Signs of Asbestos?

With an estimated 500,000 structures containing asbestos still existing across the UK, it is clear that we must still be vigilant in safeguarding against its effects. In order to limit the risks of exposure, you should be aware of the most common signs of asbestos.

Before 1985, all types of asbestos were still legal in the UK. They were actively used in buildings and appliances throughout the country, including everything from housing pipes, insulation and roofing materials to boilers and hair dryers. In fact, HSE states that all buildings built before the start of the 21st century could potentially contain asbestos.

Asbestos was used in everything from industrial factories to schools, making it essential that workers take particular care in older buildings. Tradesmen such as plumbers, builders and electricians face the greatest risk when carrying out jobs on these builds, as disrupting asbestos could lead to them becoming exposed.

Non friable asbestos refers to compounds which only use a small proportion of asbestos. They don’t crumble very easily, meaning they are considered to be a fairly low risk. In these cases, asbestos was added with the aim of improving safety and durability. A common example is its role in cement, where it was used to reinforce the existing structure. Approximately 10-15% of the cement would be made from asbestos fibres.

Some asbestos cement products such as animal pen flat sheets and roofing tiles may contain the letters AC or ACM, indicating that they were made with asbestos. This shouldn’t be a determining factor however, as only the minority were ever marked. Asbestos cement tends to be very durable, but it should be professionally removed if it starts to crumble. Care should be taken when removing it, and handlers must have the appropriate training and protective equipment to reduce their chances of exposure.

In order to be certain of asbestos, samples should be sent to a specialist laboratory. This is the only definitive way to tell whether asbestos is present, and which variation of it is contained in the material. The information laboratories provide can help you deal with its removal/maintenance accordingly.

What should you do if you uncover asbestos? 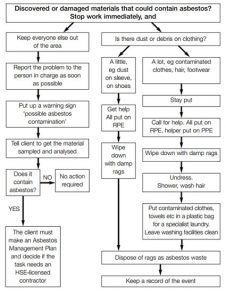 If you suspect that you have uncovered a source of asbestos, then there are several steps which you should take in order to protect the safety of yourself and those nearby. The procedure will vary depending on your current situation and whether you can see any visible dust on clothing. HSE produced an excellent diagram which shows the process:

If you’re involved in an industry where asbestos poses a risk, the absolute minimum training that is required is an asbestos awareness course. Enrolling in a course with a provider which has proof of compliance with CAR 2012 (Control of Asbestos Regulations 2012) is a great way to ensure that you’re correctly informed.